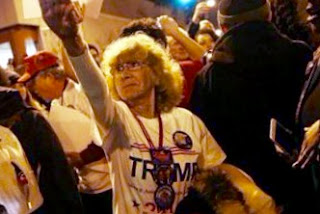 By now you probably noticed that things are not quite right in the land of Uncle Sam.  A lot of people are angry and "they ain't gonna take it any more".  So much so that the financial-media-congressional complex is losing control of the country.  In short, the dispossessed underclass from across the political spectrum are refusing to follow their marching orders handed down by the ruling elite of both the Democrats and the Republicans.  Imagine the Republicans choosing Donald Trump as their candidate for the presidency and the Democrats choosing Bernie Sanders.  The former is a demagogue while the latter is a self-declared democratic socialist.  What's up with that?

I think that the majority of Americans have finally woken up to the fact that they have been exploited mercilessly for the last forty years.  They now know that the economy is rigged for the benefit of the super rich, the .01% of the population.  For the great many, the economic recovery from the Great Recession has brought little if any relief, while the top of the top have received 80% of the newly created wealth.  Now the shit has hit the fan, and the underclass is about to take matters into their own hands.


Related Posts
The American Rentier Economy: Has the US Become a Failed Nation?
Truth Be Told: The Rich Don't Give A Shit About The Economy That You Live In
Democracy's Last Conquest: The Anglo-American Empire
Epilogue: The Tao of Politics

It's not as if the groundswell of discontent has fallen into  and file and manifested its support around a single cause or a single leader.  The USA is just far too diverse for that to happen.  Instead, there are two opposing forces within the underclass that are pushing forward their champions to advance their particular interests.  On the one hand, we have the Trump supporters, who are, for the most part, less educated and less likely to embrace the ethnic, cultural, and social diversity that now characterizes America.  On the other hand, we find the supporters of Bernie Sanders, who are better educated and more likely to be comfortable with the relatively new cultural and social mosaic that they find in America's urban landscapes.

What they both have in common is that they been shut out of the American dream.  In fact, the wealthy elite have turned their backs on the common folk, what Christopher Lasch wrote about in the 1990s in his prophetic book, The Revolt of the Elites and the Betrayal of Democracy.  By offshoring production in low wage countries with lax labour and environmental laws, the wealthy elites impoverished the lives of millions of Americans who can no longer rely on the possibility of providing for themselves and their families from wages earned in the manufacturing sector.  At the same time, the elites successfully lobbied for lower taxes which reduced the tax base supporting post-secondary education.  This in turn drove up the cost of a university education, forcing millions of students to take on crushing debt loads of which many will never be able to pay back.

For both camps, the future is bleak since the previous social scripts of either working hard on the job or in the classroom have not panned out.  Those without a higher education are trapped toiling away in low paying, dead end jobs.  Those with are bouncing back and forth from one contract to another in the gig economy.  Neither group has much hope to improve their lot if the status quo remains in place.  Consequently, both the supporters of Trump and Sanders have moved to overthrow the power structures within the established political system.  Simply put, the Tea Party is trying to take over the Republican Party, while the Occupy Wall Street movement is trying to do the same within the Democratic Party.

As could be imagined the members of the establishment are aghast.  Their worst nightmares could possibly come to pass: either a loose canon like Trump becoming the commander and chief of the most powerful military force in the history of humanity, or a democratic socialist like Sanders raising taxes on the wealthy and reining in the activities of the financial sector.  These are the choices?

From the perspective of the elites, it is clear that Hillary Clinton is the best bet to perpetuate the status quo.  However, despite the US Supreme Court ruling allowing for massive spending during the electoral campaign from the corporate sector, this financial might is offset by Trump's billions of dollars of personal wealth and Sanders amazing capacity to raise millions of dollars rapidly from the public at large.  This time around corporate cash cannot guarantee the result of the presidential election.

How this is all going to turn out is anybody's guess.  One thing is for sure, however, the USA is presently morphing into something new.  Traditional constituencies are breaking apart and a new order is on the horizon.
Posted by Brian Gibb at 8:43 AM