The Politics of Greed 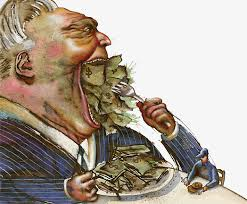 Politics in North America often hides behind the veil of economic discourse.  Underneath the veil is the unmitigated pursuit of self-interest, the maximization of personal gain.  As humans, however, we are sensitive to questions of who gets what and for what reason.  We have an innate conception of what constitutes a fair share.  Those who insist on getting more than their fair share run the risk of meeting strong resistance from those whose pocket is being picked, from those who are receiving less than they deserve.


Historically, might gave the right to take what one wants.  In some countries it is still the case.  Fortunately, in most developed societies, however, the well-being of the people must be taken into consideration in the distribution of material wealth.  Indeed, it is the mark of a developed society to have some form of wealth distribution in order to counter the dire effects of being born into poverty.
Related Posts
It’s the Stupid Economy
Truth Be Told: The Rich Don't Give A Shit About The Economy That You Live In
The Tyranny of Class in the Anglo-American Empire
The New Empire Is American as Apple Inc.


I consider myself fortunate that I was born in North America during the period of shared prosperity that followed the end of the Second World War.  Although I was born into the working class, I had no problem making my way to university after having received a quality education in the public school system.  Tuition fees were nominal and I could fund my post-secondary studies without difficulty, simply by working during the summer months and on the weekends during the school year.  Working construction, I earned five times my tuition fees in only four months.


Years of neo-liberal politics have changed the equation.  For example, my step daughter graduated from a law school in Ontario with approximately $60, 000 of student loan debt.  I guess she won’t be starting a family anytime soon.


Certainly, the cost of post-secondary education is only one marker of how things have changed over the last forty years, but it is an important one since in North America, education is considered as the most important enabler that allows individuals to improve their lot.


So how did we get here?  Did we just wake up one day and decide that we no longer could afford equal opportunity for the masses?


No, our politicians never came out and stated directly that we had no choice, that we had to deny hope for a brighter future for those less well off.  They couldn’t.  They would have been voted out of office.  Instead, they hoodwinked the public by making them believe that they were working on their behalf because their focus was to improve the economy.


If we think of the equitable distribution of wealth within a society as a zero-sum game, attempts to claim more wealth at the expense of others can be disguised by claims of intentions to grow the economy.  Essentially, the state of the economy becomes a red herring that throws the public off the scent that measures are about to be taken that will shift wealth from the working and middle classes to the upper class, for the most part, to the rentiers.  All that is required is plausibility and that’s when discussions about the economy become paramount.


For instance, during the last forty years in North America, we have been bombarded by supply-side economics.  According to the cant, lowering corporate tax rates as well for those in the upper tax brackets will free up the wealth necessary to reinvest in the real economy, leading to more economic growth, more jobs, higher wages, in other words, greater prosperity for the society.  Despite the economic data that shows otherwise, the story keeps getting told and for good reason.


The primary effect of lowering taxes for the rich is to increase their after tax income.  Our politicians have been very successful in reaching this goal.  Yet, the secondary effect of increasing prosperity for the society at large is not materializing.  No matter, since once the tax rates are lowered, the primary benefit remains for the rich, despite sluggish economic growth, a lack of jobs, and wage stagnation for those who were also supposed to benefit from the fiscal change.  Moreover, any proposal to increase tax rates to previous levels is successfully countered by claims that such measures would impair economic growth.


All the while wealth is being transferred to the top 1% of the population, our political masters maintain the image of being competent managers of the economy by making use of dubious statistics: the first being the Gross Domestic Product (GDP) and the second is the official unemployment rate, which both give the impression that economic conditions are quite good.  For example, GDP continues to grow in North America because of constant population growth.  GDP per capita would give a much better indication of economic performance, but is almost never used in the mainstream media.  Similarly, the rate of unemployment is kept artificially low simply by shrinking the size of the workforce: the long-term unemployed no longer appear in the data since they have been classified to be no longer actively searching for a job.  As a result of not counting a great number of potential workers in the calculation, the US has a very acceptable unemployment rate of 5.6%, yet the participation rate, those who are of working age and do have jobs, is at its lowest point since the late 1970s, only 62.8%.  In reality, some 93 million Americans of working age do not have jobs.  As could be expected, the participation rate is almost never mentioned in the mainstream media.


By now, it should also be obvious to everyone in our Internet enabled culture that commerce no longer respects national borders.  Today’s investor class is under no obligation to reinvest earnings back into the national economy.  No longer would anyone claim that what good for General Motors is good for America.  Instead, the golden boy of the American corporate world, Apple Inc., for example, the highest valued corporation on the planet, is registered in Ireland, assembles its products in China, and keeps its huge profits offshore.


Finally, now that the recession is over and the economy is apparently set to take off for another cycle of robust growth, it appears that Corporate America couldn’t be bothered to reinvest its record profits back into the real economy. In fact, there is more money to be made by manipulating the value of the company’s shares through increasing dividends paid to shareholders and by buying back stock.  This year will be a record year for buybacks, an estimated trillion dollars from corporate earnings that won’t be reinvested anytime soon.  So much hype about unfettering the job makers when there is a dearth of productive investment that would benefit those who toil in the real economy.


Of course there are dissenting voices.  The progressive American economists like Joseph Stiglitz, Paul Krugman, and Robert Reich come to mind.  All three are quite vocal in their critiques of neo-liberalism and American economic policy.  Yet, their ideas fail to gain traction.  It is as if they are delusional in their optimism that things could somehow be different if only we got the economic policies right.


In my opinion, they fail to see beyond their professional loyalties and to see the primary function of economics in political debate.  In short, economics has been used and will continue to be used as a polemic against egalitarian politics.  Concerns about economic performance trump concerns about the quality of democracy.


In the Realpolitik of the English speaking nations, there is no debate.  It is the “economy uber alles “, for it is the cornerstone of the politics of greed.
Posted by Brian Gibb at 7:20 AM