The Triumph of The American Matrix 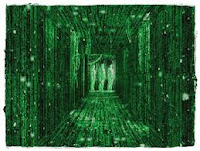 The matrix has its roots in primitive arcade games. … Cyberspace. A consensual hallucination experienced daily by billions of legitimate operators, in every nation, by children being taught mathematical concepts. … A graphic representation of data abstracted from banks of every computer in the human system. Unthinkable complexity. Lines of light ranged in the nonspace of the mind, clusters and constellations of data. Like city lights, receding.    (William Gibson, Neuromancer)

When I was in elementary school, there was a quaint map of the world hanging in every classroom courtesy of Neilson Chocolates.  I often found myself gazing at the map awestruck.  The British Empire of which the Dominion of Canada was part of was in pink, comprising 25% of the earth’s land mass.  Feelings of imperial pride would rise whenever I thought that the sun never set on the British Empire and that somehow I shared in the glory of building something marvellous.

But by the time I made it to high school, these maps were no longer to be found.  The British Empire was no more and I was living in a bright and shiny nation called Canada that now had its own flag and had just celebrated its one hundredth birthday.


Little did I know at the time, there was another empire coming into being that would surpass the territorial reach of the colour pink on the Neilson’s map and, in fact, would sever the traditional link between empire and territory.
Related Posts
Democracy's Last Conquest: The Anglo-American Empire
While the American Empire Prospers, the Nation Becomes a War Zone

I first entered into the American Matrix when I went to see the film Star Wars.  This was no mere movie.  Going to see Star Wars at the time was a global phenomenon that marked the passage into a world that fuelled the imagination of a fantastic future written, produced, and marketed by Americans.


Essentially, what makes the American Empire exceptional is its incredibly seductive soft power.  Without question, the USA still possesses the military might that the rest of the world cannot match and it still controls the way the rules of the global political economy are written and enforced.  The tools of traditional empire are at its disposal.  But what sets it apart is that the vast majority of the world’s inhabitants consent to enter into the American Matrix with the hope of obtaining some version of the American dream.  Play by the rules, in other words accept the notion of the rule of law laid down by Americans, and if you work hard, you too can have some of the stuff that characterizes an almost out-of-this-world material wealth that many Americans seem to enjoy.


Whereas the Brits would hold out the promise of the Christian version of the after-life to entice the conquered peoples to accept British economic domination, the Americans bring a secular science fiction future in the here and now so to convince the world’s peoples that the American way allows for an approximation of heaven on earth.


I know.  As a knowledge worker living in the second decade of the twenty-first century, despite being born into the working class, I am surrounded by affordable luxury that provides a lifestyle that surpasses the material comfort of European royalty living in the nineteenth century.


A house, central heating, central air conditioning, spa, household appliances, two cars, health club membership, yearly vacations, pension, disposable income, food and wine from around the world, an electronic entertainment system that brings an incredible array of cultural performances into the comfort of my own home, the Internet, and several mobile computing devices are all part of my middle class lifestyle.


You could say that I live on the right side of the digital divide, enjoying the fruits of empire.  All this comfort comes about because, along with the vast majority of people around me, we go about our business following the cultural script that the American matrix advances: go to school, get a degree, get a job, get married, buy a house, have some kids, change jobs, retire, enjoy the good life as long as you can, grow old gracefully, leave something for the kids.  And also because we happen to have the good fortune to live in a sparsely inhabited country, extremely rich in natural resources, that shares the longest undefended border in the world with the USA, the most powerful nation on earth.


Deviations from the central script are allowed, but don’t stray too far or you will be bitterly disappointed.  The matrix is very robust and resilient to systemic change.  Why press for democratic reform when you can simply get away from it all by catching a cheap flight to a sun holiday destination?


Don’t get me wrong.  I would gladly take a deep cut to my material comfort in order to be able to participate meaningfully in the political process, but I happen to live in an empire not in a democratic republic.  Either I content myself with casting my habitually wasted vote or I move elsewhere and become a citizen of a country that values democracy.


One other thing to keep in mind is that you don’t actually need to live in the USA to enter and find a comfy place within the American matrix.  In fact, more than half of the American population can only access the cheap entertainment portion of the matrix without being able to realize the product placement in their own lives.  Despite living in close proximity to the cultural elites that built the matrix, the majority of Americans live on the outside, looking in, hoping that one day their fortunes will change.


In a world brought forward by the marriage of free flowing capital with technology, supported by a massive global work force, quality of life is affected but not determined by the nation state where one resides.  Finding a lucrative place within a production chain of either goods or services can be just as important and in many cases even more important.


Even in the richest nations, low-skilled labour barely offers a living wage, and if it does, one’s life will be just a pale comparison of the lives lived by the more fortunate.


In the matrix, hell is receiving constant status updates on Facebook from friends that are having awesome adventures while you worry about whether the electricity is about to be cut off.
Posted by Brian Gibb at 7:06 AM