Epilogue: The Tao of Politics 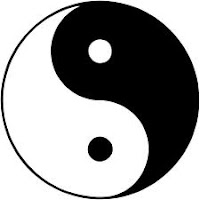 Having taken a break from writing this blog over the summer, I have had the time to reflect over the texts that I have read and written over the last two years. I'd like to share those reflections with you.

At the heart of the Tao is the dynamic interaction between yin and yang represented by a symbolic circle divided into a black and a white half, each containing a smaller circle or dot of the opposite color. Effectively, this represents a perpetual motion in which yin gives way to yang, which in turn transforms back to yin and so on.

When I was reading John Dunn's brilliant book, Democracy: A History, I came across a reference to an essay written by Philippe Buonarroti shortly after the French Revolution in which Buonarroti asserted that at the base of any society is an intractable conflict or tension between the order of privilege and the order of equality and this conflict was the driver of the French Revolution.

In other words, at the heart of societal discord is a binary opposition. Sounds familiar.

While I was mulling this over, I picked up a copy of George Lakoff's, The Political Mind. In his book Lakoff puts forth the idea of the family as the central metaphor that controls American politics. He says that there are two competing visions of the family at play, the conservative family dominated by the authoritarian male and the progressive family in which more or less equal partners nurture the family.

What makes Lakoff's thesis particularly interesting is that he claims that these differences are to be found at the synaptic level in the brain. Those with conservative synaptic networks have much difficulty processing information associated with progressive perspectives and visa versa.

Pushing this binary opposition towards the Tao, a pattern begins to emerge in which we can associate the male energy of yang with the order of privilege and the conservative mindset while drawing parallels between the female energy of yin, the order of equality, and the progressive mindset. Importantly, this opposition or complementarity is grounded biologically in the structure of brain.

What really brought the notion home to me concerning the relevance of the Tao when looking at politics is primate expert, Robert Sapolsky's, finding that when looking at human sexual behavior and social patterns, we find that humans display characteristics associated with both tournament and pair-bonding species. According to Sapolsky, we have aspects of both species hard-wired into our DNA.

To paraphrase Sapolsky, "isn't that interesting? What's up with that?"

Well, in my opinion it goes a long way to explaining the historical ebb and flow of political conflict over the last two hundred years and perhaps longer. In short, this basic biological duality hard-wired into humanity is the root cause of the tension between the order of privilege and the order of equality, between conservative and progressive. Essentially, the order of privilege is the manifestation of an alpha male status hierarchy finding its way into conservative rhetoric while the equalitarian traits of a pair-bonding species is manifested into the social democratic beliefs of progressives. The interplay of these two opposing but complementary forces unfolds as the Tao of politics.

The incorporation of two radically mating patterns into the evolution of the human species begets an intractable conflict between the opposing sides. Nothing is stronger than the biological imperative to reproduce, so it should come as no surprise that each side is incapable of finding common ground with the other since to do so runs contrary to the genetic program each group possesses that is designed to increase their chances of passing on their genes to the next generation.

Simply put, alphas will be alphas and betas will be betas and never the twain shall meet.

Consequently, what we see at the society at large is a small group of alpha males trying to amass as much wealth and power as possible so they can engage in an ostentatious display of wealth in order to attract the most desirable females. If in doubt, take a look at the advertising for the sale of luxury items. This group is opposed by a much larger of beta males and females that push for a more equal distribution of the society's wealth.

Of course there is a variance in how this opposition plays out from one society to another. Path dependence is in play, so turning points in the evolution of a society, (wars, revolutions, changes in religious beliefs) can push a society in either direction so that we can identify societies as being predominantly supportive of either alpha or beta procreation patterns. This is not say that societies attain a permanent equilibrium that entrenches the rule of one over the other. In fact, over time each element can gain ascendency over the other in what could be described as the eternal motion of the Tao.

History repeats itself in an unmistaken pattern.

Regardless of the supporting ideology favored by the alphas, wealth is concentrated over time into their hands in order to support their mating habits at the expense of the betas. Eventually, the betas realize that the depletion of resources threatens the survival of their offspring so they organize and depose of the alphas that rule the society. Previously, this was done exclusively by armed conflict, but as societies develop they come to realize that it is advantageous to contain this perpetual conflict within their political institutions, hence the spread of democracy across the globe over the last two hundred years.

Each side possesses a competitive advantage that allows them to rule the roost periodically. In short, alphas are more motivated to organize so they can extract wealth from the betas, but betas have numbers on their side. Also, alphas are extremely sensitive to differences within a status hierarchy so they will be tenacious in their attempt to procure wealth since inequality of wealth distribution and subsequent ostentatious display of wealth is greatest at the very top of the hierarchy. Their steadfast refusal to share wealth is their undoing because eventually the sleeping giant awakes and addresses the situation. Betas, on the other hand, have difficulty organizing. Their propensity to share and cooperate makes them reticent to confront the forces of the alpha groups early on. It takes considerable time before their collective angst reaches a tipping point and they spring into action.

Looking back at the post war years, there is a definite oscillation between the order of privilege and the order of equality. Indeed, the conclusion of the Second World War ushered in a historical period in the English speaking countries in which there was great economic growth and the increased wealth was equitably divided throughout the societies. Thirty years later, marked by the election of Ronald Reagan and Margaret Thatcher, the order of privilege reestablished its control and material wealth over time became more concentrated in the upper echelons of the respective societies.

Today, we appear to be at the beginning of the end of the rule of the order of privilege. The global economy which the alphas so diligently worked to bring about is about to collapse. Mountains of debt have arisen as a result of the desire to increase economic growth so to enrich a privileged elite. To meet these debt obligations, the order of privilege is attempting to force austerity measures upon the betas. The question that remains to be answered is how long will it take the betas to respond and in what manner their response will take form.

Were the recent riots and looting in England an isolated event or are they the precursors to the type of change of regime that we have seen during the Arab spring? Certainly, the mettle of the West's political institutions are about to undergo a severe stress test. Perhaps, they will hold. Perhaps, they will buckle. One way or another, as we enter a period of crisis for the global political economy, there will be opportunities for significant societal change to come about.

This state of affairs reminds me of the lyrics from Bob Dylan's song, The Times Are A-Changing:

Come writers and critics
Who prophesize with your pen
And keep your eyes wide
The chance won't come again
And don't speak too soon
For the wheel's still in spin
And there's no tellin' who
That it's namin'
For the loser now
Will be later to win
For the times they are a-changin'.
Posted by Brian Gibb at 11:04 AM